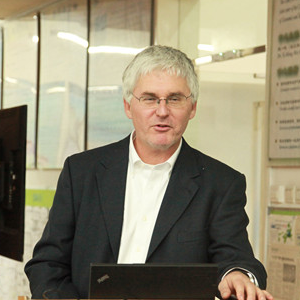 Klaus Hubacek is a Professor in Ecological Economics at Energy and Sustainability Research Institute Groningen, University of Groningen. His research focuses on conceptualizing and modeling the interaction between human and environmental systems and developing and modeling scenarios of future change. Klaus has published over 200 research articles on topics such as climate change adaptation and mitigation, participatory modeling, management of ecosystems services, land use change and governance. He has published in international journals such as Nature, Nature Climate Change, Nature Sustainability, and the Proceedings of the National Academy of Sciences. His research was showcased in national and international news outlets including ScienceNews, The Guardian, Le Monde, New Scientist, CBS, the German TV and Radio, and the BBC.

He conducted studies for a number of national agencies in Austria, the Czech Republic, China, Japan, Spain, the UK, and the U.S. and international institutions such as the European Commission, the Inter-American Development Bank, the OECD, and the World Bank. He served on advisory boards for a number of agencies such as the Climate Center of the City of Shanghai, China and the Sustainable Land Use program of the German Federal Ministry of Education and Research. Klaus also serves on the editorial board of a number of scientific journals such as Applied Energy and Journal of Industrial Ecology. Also, he is a lead author for the 6th Assessment Report of the IPCC, Workgroup III.